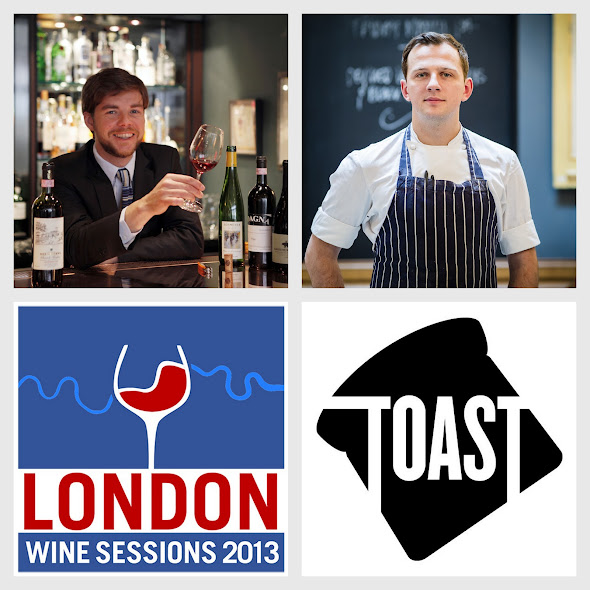 Something brilliant is happening to wine in London. It is emerging from the dark, leathery corners of St James's and Mayfair and getting loose among new bars, bistrots, retailers and events. Interesting and fine wines are becoming more accessible, and the wine-curious are finding new ways of enjoying it and learning about it.

The Wine Sessions, in association with TOAST, will bring together a sparkling cross-section of wine-world talent for a full day of talks and tastings, with bars from Sager & Wilde, Tutto and Passione Vino, a bookstore run by ace Shoreditch gallery Material, food from Trullo and James Lowe, and music from Daniel Willis of the Clove Club.

Tickets are priced at £15–£30, with a donation made to the water charity 2water.org. Entry to the bar and bookstore is free.

WINE BASICS with Joe Wadsack
Everything for the neophyte: how to taste wine, what it all means, and why it's all much simpler than you thought. Wine buyer, writer, TV presenter and ex-RAF Pilot Joe Wadsack conducts a swift foray into the basics, and talks you through bubbles, a white, a red and a pink. And you can ask him anything! So long as it's about wine or mach numbers.
Talk and Q&A with four tastes.

AROUND THE WORLD IN SEVEN TASTES with Jancis Robinson MW
In October, Jancis Robinson MW and Hugh Johnson launched the seventh edition of their amazing World Atlas of Wine, featuring 25 new maps to reflect recent developments in the wine world. IT'S exciting to see wine culture emerging in countries such as Mexico and China, and lesser-known wine zones in Germany and Italy, such as as Ahr and Etna, demanding attention. We are thrilled that Jancis is appearing at the Wine Sessions, offering up seven wines, each representing a new map in the Atlas.
Talk with seven tastes.

HOUSE HUNTING with Ruth Spivey (Street Vin, Wine Car Boot) and Zeren Wilson (Bitten & Written)
In Ruth's trademark Flight Club style, a flight of house reds from selected London restaurants, to be tasted side by side and blind – can you match the wine to the restaurant? Ruth and Zeren will also chat about the history of house wine, whether the customer should always jump to ‘the second one down’, and whether its embarrassing to order 'the house' (it's not!).
Talk with six tastes, snacks included.

THE OTHER FRANCE with Frank Embleton (Clove Club), Emily Harman (Grain Store/Zetter Hotel & Townhouse) and Mark Andrew (Roberson Wine, Noble Rot)
Bordeaux and burgundy are fabulous, champagne is the cat's meow, but there is miles more to discover about the wines of France. Mark Andrew of Roberson Wines, Emily Harman of the Zetter Group and Frank Embleton from the Clove Club show off six fascinating wines that prove it's worth prodding about the shelves or leafing through the winelist for smaller producers, unknown regions and lesser-known grape varieties.
Talk with six tastes.

THE FAMOUS FIVE with Tom Harrow aka WineChap
This is the moment when the big guns come out, as Tom pours a series of humdingers, including a top-marque champagne, a serious claret, some fine burgundy, an Italian thriller and something sweet and exciting from Hungary. WineChap always makes learning fun – we're delighted to have him with us.
Talk with five fantastic tastes.

RAD FOOD MATCHING WITH JAMES LOWE AND JACK LEWENS
Time for some super snacks, as James Lowe, soon to be opening his own restaurant in East London, collaborates with Jack Lewens (ex Quo Vadis) to feed you with food/wine pairings to surprise and delight including:

Lots of illuminating chat and Q&A about how to match wine with raw dishes, how decanting wine changes its properties, and tunes from Daniel Willis of Clove Club!

Add your blog review of The London Wine Sessions