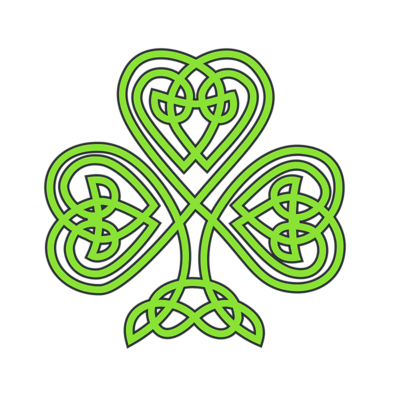 It's that time of year when our friends across the sea, spend the evening revelling and generally enjoying the craic in local hostelries and bars. March 17th is of course St. Patricks day.... Here's a bit of trivia for you...

The colour green has been associated with Ireland since at least the 1640s, when the green harp flag was used by the Irish Catholic Confederation. Green ribbons and shamrocks have been worn on St Patrick's Day since at least the 1680s. Green was adopted as the colour of the Friendly Brothers of St Patrick, an Irish fraternity founded in about 1750. However, when the Order of St. Patrick—an Anglo-Irish chivalric order—was founded in 1783 it adopted blue as its colour. This led to blue being associated with St Patrick. In the 1790s, green became associated with Irish nationalism when it was used by the United Irishmen. This was a republican organisation—led mostly by Protestants but with many Catholic members—who launched a rebellion in 1798 against British rule. The phrase "wearing of the green" comes from a song of the same name, which laments United Irishmen supporters being persecuted for wearing green. Throughout the 19th and 20th centuries, the colour green and its association with Saint Patrick's Day grew.

We're putting on our own little Paddy's night party with our French and Irish inspired menu. It's time to adorn yourself with shamrocks at let your inner Leprechaun and join us for the evening. Don't forget to wear something green

You'll be welcomed with a Velvet Noir ( guinness and champagne cocktail)

Then treated to a three course meal

Served with colcannon and vegetables.

Drinks will be available from our cash bar:

Have a query about this event? Contact La Petite Bouchee