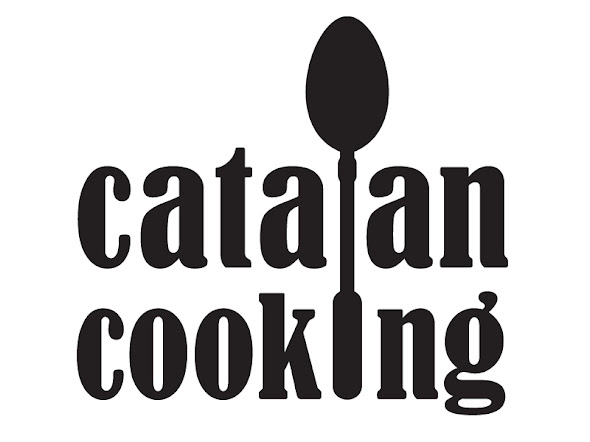 Rachel McCormack is originally from Scotland but spent most of her twenties living and working in Spain, mostly Barcelona. She now shares her knowledge and love for Catalan cuisine in London by offering cooking classes and pop up meals and events in various locations around London.
She has been featured in the Evening Standard, the Daily Mail, Food and Travel Magazine and The Daily Telegraph.
She is a panelist on Radio 4's The Kitchen Cabinet

The next Catalan Cooking Casa de Pages meal is Sat June 18th with a menu based on some of Santi Santamaria’s cooking as well as a couple of other recipes. No doubt the menu will be added to when... Read more 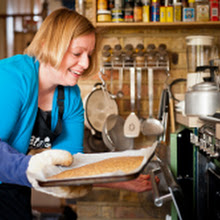 Enjoy a hearty buffet-style Catalan feast cooked in the Case de Pages (Home of a Peasant) style with many dishes not otherwise available in London restaurants.

On Wednesday 14th September I’ll be doing a Catalan Cooking demonstration at Barcelona Tapas, Middlesex Street Rather than getting your hands dirty you just come and enjoy the food, a glass of cava... Read more

Catalans love wild mushrooms. When they get off the beach at the end of August they go rushing in their cars to hills and mountains to seek them out. Rural... Read more

We shall get stuck into autumnal lentils, autumn fish, seasonal vegetable fideos and two types of crema catalana.

We shall make:... Read more

For this class we will be celebrating all things Catalan and Christmas.

It is very common in Catalonia, and all over the rest of Spain to have fish and shell fish at Christmas so we will be making a... Read more 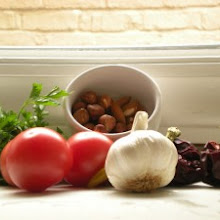 Allioli and Romesco are most commonly used in the UK with the barbecue in the summer but for Catalans they are the base for a wide variety of dishes, especially in winter. In this class you will... Read more

Spain is full of hunters. They are generally not the betweeded upper middle class men but inhabitants of villages, following the tradition of the ordinary man hunting to supplement the family... Read more 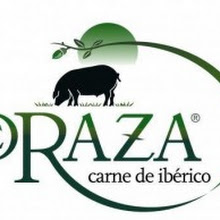 Join Catalan Cooking for a day of DeRaza Iberico Pig. The black iberico pig is the reason that Spain makes the best ham in the world and is quite simply the best pork possible to eat.

The Spanish region of Catalonia is fiercely protective of its identity and Catalan food is a source of great cultural pride.

Calcotada at the Drapers Arms 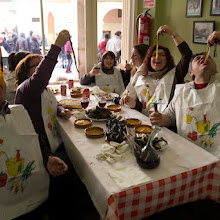 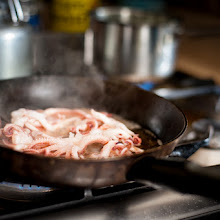 Squid is one of the most sustainable seafood around and woefully neglected by domestic cooks. We seem to think we have to go to a fancy restaurant to eat it as it is too complicated for home.

The May class at Catalan cooking will be a post pig day celebration of iberico pork, seasonal asparagus, and a traditional recipe from Tossa de Mar which I learned from a 75 year old lady doing the... Read more

The biggest PR cliche for any press release is that Spring had sprung so let's just say it will be bouncing around, sprouting out the ground, raining on us (hopefully before there’s a drought in SE... Read more

Paella and other rice dishes 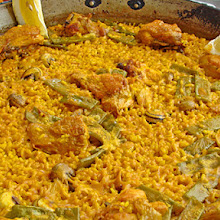 Some very dear friends of mine from Barcelona came to visit recently. We saw a paella being made out in the open and they were utterly appalled. After declaring it a crime against paella, rice,... Read more 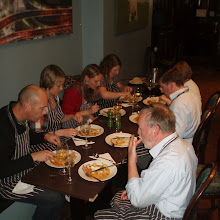 This August we will take a step outside Catalonia and make pudin de centollo - spider crab pate - a dish from the Atlantic coast region of Cantabria. We'll also make peaches stuffed with pork, ... Read more 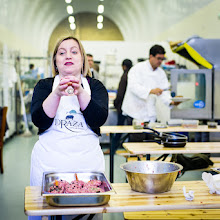 Hopefully we'll be in the middle of an Indian summer in September so a very popular dish in Catalan restaurants - tuna tartar (tartar de toninya) will be an ideal start to make for warm September... Read more 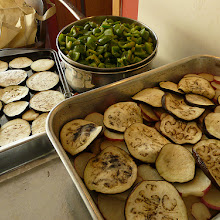 Catalan Cooking Class - Allioli and Romesco - Going With My Gut

The Hubby and I are actually pretty accomplished cooks, and over the years we've taken a number of classes, but we never really cook Spanish. More confident with preparing sashimi than Spanish seems to be rather ridiculous, and as I've been talking to Rachel on twitter for well over a year now, I was determined to finally get along to one of her Catalan masterclasses. There were things I learnt here that I never knew :0)

Fideua, an utterly alien Valencian pasta dish in which you're looking to crisp the pasta, until it curls - delicious

Squid doughnuts, yes, really, which we then flavoured with mushroom powder, fennel seeds, cumin and curry, or squid ink... And they really do taste like doughnuts :0)

Squid stuffed with sobrasada, which is made in Majorca, and is a little like chorizo, but has a more pate like texture. This was very good in the squid, adding heat and spice (we also had it uncooked, when it was more delicate)

Squid stuffed with onions, which was utterly delicious too, and much nicer than it sounds!

We also made sofregit de calamar, which is like a very reduced ragu, intensified with squid, very rich, deep and full of umami flavours.

Rachel is an excellent host, we also had some very good bread, olives, sea urchin pate, the sobrasada, all washed down with delicious sherry. I will definitely be cooking with Rachel again :0) Now if only I could get to one of her pig days, which alas are always on Sundays! I'm utterly dying to get to one of them!

I finally feel as though I have a little more grasp of the style of Catalan cooking, and Rachel makes an admirable guide.